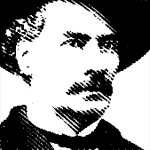 "Perceiving that the force of the arrow had been neutralized, I drew a heavy holster pistol, and wheeling half round in my saddle, pointed it at the Apaches.  This caused them to fall back in some alarm, and I took advantage of that fact to redouble my speed."

In the old west, a good horse was sometimes the difference between life and death.  Written by Major John Cremony, who served most of his military career in the Southwest and personally knew Apache Chiefs Mangas Coloradas and Cochise. He was the first white man to become fluent in Apache, publishing the first written compilation of their language.

About the year 1862, it became necessary for me to visit the town of Socorro, in New Mexico, for the purpose of assisting in the purchase of sheep.  It was my most excellent fortune to possess a horse whose equal I have never seen.  With high courage and almost fabulous powers of endurance—strong, swift, and handsome—I had made him a special pet, and nobly did he answer my appeal when occasion demanded.

At that time Fort Craig had no existence, and the space between Doña Ana and Socorro, a distance of one hundred and twenty-five miles, is a large desert, well supplied with fine grass in some portions, but absolutely destitute of water or shade for ninety-six miles.  This intervening strip of territory is known by the unattractive appellation of the "Jornada del Muerto," or the Dead Man's Journey.  On the east the road is fringed for about sixty miles by the Sierra Blanca, a noted stronghold of that people; and from its heights the Apache are enabled distinctly to perceive any party of travelers coming over the wide and unsheltered expanse of the Jornada del Muerto.  As the plain affords no opportunity for ambush, they come sweeping upon the unsuspecting immigrant in more than usual numbers, and if successful in their at tack, invariably destroy all of the party; for there is no possible chance of escape, and the Apache never take any prisoners but women and young children, and they become captives for life.

At Socorro was a small American garrison, consisting of about half a company of the Second Dragoons, commanded by Lieut. Reuben Campbell, an officer whose acquaintance I had made during the Mexican war.  I left Doña Ana about three A. M., and traveled leisurely until four in the afternoon, when I unsaddled my horse, staked him to a strong picket pin planted in a field of fine grass, and laid down under the lee side of a cactus to catch a modicum of shade.  At midnight, I resumed my journey, and reached Socorro next day about eleven A. M., having traveled during the cool of the night at a much more rapid pace.  During the trip I neither saw an Indian nor an Indian sign; and here let me add that the Apaches of the Jornada, the Mescalero Apaches, were at the time in a state of active hostility.

Most pleasantly did I pass two days with Lieut. Campbell, and we took our leave on the morning of the third day.  My trip up had been unaccompanied by any event of interest, and I sincerely hoped that my journey down would be equally tame and spiritless; but this was not to be.

I saved my noble beast all I could, frequently dismounting and leading him by the bridle, so as to retain his strength and speed in case of necessity.  In this way we jogged on until about three o'clock in the afternoon, by which time we had accomplished about fifty miles, leaving some seventy-five yet to go. The sun was in tensely oppressive. A friendly bush, surrounded with fine grass, and standing about one hundred yards to the left of the hard and splendid natural road which runs through four-fifths of the Jornada, invited me to partake of its modest shade, and I turned my horse in that direction, but was surprised at noticing a column of dust to my left, which had the appearance of being in violent motion, and coming my way.

Instinctively I felt that it was caused by Apaches; and I took the precaution to tighten my horse's girths, see that the saddle was properly placed and re-cap my four six- shooters, two of which were in my belt, and two in my holsters.  I also untied a Mexican serape, or blanket, which was lashed to the after part of my saddle, and doubling it, I passed it over my shoulders and tied it under my chin by a stout buckskin thong.

By this time the character of the coming party was unmistakable, and they were evidently bent on cutting me off from the road.  My gallant horse seemed to appreciate the condition of affairs almost as well as I, and bounded on like a bird.  The pursuing party failed in their first attempt and entered the road about three hundred yards to my rear.  Perceiving that my horse was infinitely superior in speed and power, I drew rein to save him all that I could, and allowed the Indians to come within fifty yards.  There were some forty of them, none with firearms, but mainly supplied with lances, only five or six of the number carrying bows and arrows.  These last named projectiles commenced to whistle near me; but I paid no heed, keeping steadily on my course, until one penetrated my blanket; but the effect was completely destroyed by the fluttering of its heavy double folds, which were kept in a rattling motion by the speed at which we were going.  Perceiving that the force of the arrow had been neutralized, I drew a heavy holster pistol, and wheeling half round in my saddle, pointed it at the Apaches.  This caused them to fall back in some alarm, and I took advantage of that fact to redouble my speed for a mile or so, gaining some six hundred yards on my pursuers, when I again drew rein to save my horse.

It required a long time for them to again recover shooting distance, but their yells and cries were perpetual.  In this manner, alternately checking and speeding my horse, and presenting my pistol at the savages, we scoured over many miles of that infernal Jornada.  Several arrows were sticking in my blanket; one had grazed my right arm, just bringing blood, and the other had touched my left thigh.  I then became convinced that my horse was the main object of their pursuit.  Those Apaches resolved to have him, if possible.  Of course, my life would have been sacrificed, if they could only manage that little affair.

Near the foot of the Jornada, the road takes a bold sweeping curve to the left, toward Doña Ana, being interrupted by a low but rugged series of small hills and deep ravines.  About eight P. M., the moon being bright and not a cloud visible, I dashed round the first hill, and was surprised to note that the Apaches had apparently given up the chase, for I neither heard nor saw any more of them.  Suddenly it flashed upon my mind that they might have some short cut-off, and had pursued it with the intention of intercepting me.  For the first time I struck my rowels into the reeking flanks of my poor steed, and most gallantly did he respond to this last call.  He fairly flew over the road.  Hill after hill was passed with wonderful rapidity until nearly a quarter of an hour had elapsed, when I again heard my Apache friends, about eighty yards in my rear.  No sooner did they perceive that their design had been frustrated, than they recommenced their yells with additional vigor.  But their horses were done, as well as mine.  They had come at their best pace the whole way, while mine had been saved from time to time.

In this manner we continued our contest until I arrived within five miles of Doña Ana, about eleven P. M., when, feeling myself comparatively safe, I commenced emptying the cylinders of my heavy holster pistols among them.  Their cries and yells were fearful at this time, but I did not cease firing until they had fallen back out of reach.  The remainder of my journey was made without their company, and I reached Doña Ana about midnight, having made the distance of one hundred and twenty-five miles, on one horse, in the space of twenty-one hours, the last seventy miles being performed at a run.

So soon as I arrived, I threw off my serape, which had quite a number of arrows sticking in it, rubbed my horse down dry with good, soft straw, then washed him all over with strong whiskey and water, and again rubbed him dry.  This was followed by taking off his shoes, and giving him about two quarts of whiskey and water as a draught.  His whole body and limbs were then swathed in blankets, a mess of cut hay, sprinkled with water and mixed with a couple of pounds of raw steak, cut into small pieces, was given him to eat, and a deep bed of clean dry straw prepared for him to sink into.

I then refreshed my inner man with a wholesome whiskey toddy, and sought repose, from which I did not awaken for all that day and the succeeding night.  On the second day after the above adventure, I visited my horse and found him in as fine condition as any one could reasonably expect.  On many a subsequent occasion he served me with equal zeal and capability, but never more under such exciting circumstances.