Joel Abbot - Through War and Scandal 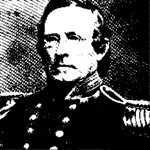 "He was commissioned by McDonough and then ordered to destroy a cache of masts and spars that were to be used by the British in fitting out their naval force. When McDonough asked Abbot if he were ready to die for his country, he received the reply "Certainly, sir; that is what I came into the service for."  Dressed as a British officer and risking summary execution as a spy, Abbot destroyed the gear."

"Go along to get along" was not the credo of Joel Abbot of the United States Navy.  Distinguished in combat, he risked his career to to what he thought was right, challenging one of the great naval heroes of the republic.  His story proves that you might be down, but never out.

If anyone could be described as having a career of extreme highs and lows, it is Commodore Joel Abbot. He started his career as a war hero, then was convicted and suspended by a naval court martial and finally resurrected his reputation off Africa and east Asia. He served 43½ years, rising to the rank that today is known as rear admiral.

Joel Abbot was born 18 January 1793 in Westford, Massachusetts, the son of Joel Abbot and Lydia Cummings. He eventually moved to Warren, Rhode Island.

In the early stages of the War of 1812, 15 June 1812, young Abbot received the appointment of Midshipman in the United States Navy. He was attached to the frigate President, commanded by Commodore John Rodgers, and later became Rodgers’ aide and signal officer. While in charge of a prize, Abbot was captured and made a prisoner of war; after being released, he was appointed to service on Lake Champlain under Commodore Thomas McDonough.

He was commissioned by McDonough and then ordered to destroy a cache of masts and spars that were to be used by the British in fitting out their naval force. When McDonough asked Abbot if he were ready to die for his country, he received the reply "Certainly, sir; that is what I came into the service for." Dressed as a British officer and risking summary execution as a spy, Abbot destroyed the gear. For his success in this dangerous exploit, and for his bravery in the engagement at Cumberland Head on 11 September 1814, the young officer received a sword of honor from Congress and was commissioned a lieutenant.

Beginning in 1818, he cruised the Mediterranean as an attaché to the frigate Guerriere. On 24 July 1818 Guerriere put to sea, carrying the American minister to Russia to his new post. After calls at Gibraltar, Isle of Wight and Copenhagen, Guerriere debarked the American minister and his family at Kronstadt, Russia, on 17 September 1818.

From 1820 to 1821 Abbot was stationed at the Charlestown Navy Yard in Boston, where the schooner Alligator was being built. Alligator, a swift 12-gun schooner built in 1820, had a brief but remarkable career. It was one of two schooners built at the Charlestown Navy Yard in Boston, and was the last known example of the five 12-gun schooners that were built to stop African slave traders and pirates. Abbot sailed the Alligator along the African coast, and successfully took to Boston a Portuguese pirate ship that had been captured.

However, while Lt. Abbot was assigned to Charlestown he came to believe that a purchasing agent of the Navy Department, one Lt. Col. Amos Binney, and the yard’s former clerk, Benjamin H. Fosdick, were engaged in skulduggery. Abbot investigated Binney’s irregularities and in January 1822 filed a formal accusation against Binney and the yard’s commandant, Captain Isaac Hull.

Abbot was tackling a legend. Captain Hull had been commanding officer of the heavy frigate Constitution during the War of 1812, and famously captured the British frigate H.M.S. Guerriere after a pitched battle that galvanized both nations. Hull was an unlikely criminal; among his many honors, he held a large gold medal awarded by Congress.

Abbot basically accused Hull of complicity in Binney’s rampant misappropriation of government property and of ignoring Fosdick’s ongoing payroll fraud. He also accused Hull of being an oppressive and vindictive commanding officer. Some of Abbot’s accusations against Binney dated as far back as July 1818, when Abbot had sailed aboard U.S.S. Guerriere and found poor and overpriced provisions that were bought by Binney. The case against Fosdick was more solid, and he had fled to New York under a cloud of suspicion.

Investigations followed. However, virtually every witness refuted Abbot’s testimony. They said that Captain Hull had been independently investigating Fosdick and was preparing fraud charges; in fact Hull’s aides had been instructed to arrest Fosdick at their first opportunity. The main accusations against Binney fizzled when most of the missing government property conveniently reappeared.

The trial and inquiries caused a sensation because many of the heroes of the War of 1812 were swept into the scandal or gave testimony. Friends and politicians wrote to Abbot, unsuccessfully imploring him to recant and perhaps admit that the evidence favored Hull. Even the former captain of H.M.S. Guerriere, the highly respected Royal Navy hero James Richard Dacres, begged Abbot to reconsider.

As widely predicted, Hull was exonerated by a court of inquiry in August 1822. In its conclusions, the court implied that Abbot, now 29 years old, had libeled Hull and committed perjury.

In a second bizarre twist to Abbot’s otherwise solid career, Captain David Porter accused him of making “numerous, scandalous and false insinuations against the official character of his superior officer, Capt. Isaac Hull.” Abbot was tried by a general court martial that convened aboard the ship-of-the-line Independence at Charlestown Navy Yard in late 1822. It was a battle of decorated heros of the War of 1812, and Abbot lost; he was convicted of defaming Hull and was suspended from the Navy for two years. Abbot’s relatively light sentence could be an acknowledgment that the death of his wife in 1821 had contributed to his lack of judgment, or it could have been simply in deference to his war record. It could also be that Binney and Fosdick were believed to have evaded justice.

In any case, the effects of the court martial slowly dissipated and Abbot later returned to duty. He married Laura Wheaton, daughter of Charles and Abigail (Miller) Wheaton, at Warren, Rhode Island, on 29 November 1825. They eventually had eight children and their descendents sponsored, christened and launched both U.S. Navy destroyers named after Abbot, DD 184 in 1918 and DD 629 in 1943.

In 1843 he took command of the sloop-of-war Decatur, one of Commodore Perry’s African squadron. While at Cape Palmas, he learned that Bishop John Payne was in imminent danger at Cavalla, and promptly sailing to his aid was instrumental in saving him from a force of 500 armed natives. His conduct on the African coast was warmly commended by Commodore Perry and the Secretary of the Navy. On 3 October, 1850, Abbot was promoted to captain.

In 1852, when Commodore Perry was entrusted with power to select the officers to accompany him on his famous Japan expedition, he placed Captain Abbot in command of the corvette Macedonian. The ship departed New York in April 1853, and Abbot was with Perry until the mission of the expedition — negotiating of a treaty that would open Japanese ports to the commerce of the United States — was accomplished. Captain Abbot’s son, Charles Wheaton Abbot, sailed as a master’s mate. Another son (and the ship’s clerk), Nathan Miller Wheaton Abbot, died en route to Japan and was buried on Principe Island off the west coast of Africa.

On Perry’s return home, Captain Abbot was appointed commodore of the United States naval force off the coasts of China and Japan, known as the East India Squadron.

Chinese pirates were preying upon American vessels, and United States merchants engaged in business in various Chinese ports urgently demanded protection. Commodore Abbot’s forceful strategy received the emphatic approval of the United States Government. As reported by the Secretary of the Navy in 1855:

Numerous hordes of pirates infest the Chinese waters and interfere seriously with commerce in that region. Commodore Abbot has at all times shown himself prompt and judicious in the discharge of the delicate duties imposed upon him. Several engagements have taken place between detachments from the American men-of-war on that station and the pirates, which have resulted most disastrously to the latter. Many of the piratical junks have been destroyed, their depots on shore burnt, and a number of the pirates killed.

Commodore Abbot accomplished his mission, but not without seriously compromising his health. He was strongly urged by his physicians to return home, but with a rare devotion to his duty, he declined to leave his post until his work was done. At length, his relief ship was ordered, and, having already been out of the United States three months, would have seasonably reached him had she not been unexpectedly detained. He died at Hong Kong, China, December 14, 1855, aged sixty-three years. Commodore Abbot was the twenty-sixth in the order of seniority on the navy list.