The Battle of Valcour Island - Part 1 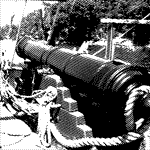 "It was a strife of pygmies for the prize of a continent, and the leaders are entitled to full credit both for their antecedent energy and for their dispositions in the contest; not least the unhappy man who, having done so much to save his country, afterward blasted his name by a treason unsurpassed in modern war."

The importance of Lake Champlain, of its tributary Lake George, and of the Hudson River, as forming a consecutive, though not continuous, water line of communications from the St. Lawrence to New York was plain to all.  It was always a goal of the British to control the waterways and split the colonies, defeating each in turn.

At the time when hostilities began between Great Britain and her American Colonies, the fact was realized generally, being evident to reason and taught by experience, that control of the water, both ocean and inland, would have a preponderant effect upon the contest.  And in 1776 the two antagonists contested for Lake Champlain.  After the failed American attempt to take Quebec, both parties began at once to prepare for a contest upon Lake Champlain.  American General Schuyler, commanding the Northern Department, wrote: "We have happily such a naval superiority on Lake Champlain, that I have a confident hope the enemy will not appear upon it this campaign, especially as our force is increasing by the addition of gondolas, two nearly finished.”

Unfortunately for the Americans, their resources in men and means were far inferior to those of their opponents, who constructed a sailing ship larger and better armed than any ever seen in inland waters.  Inflexible, with a battery of eighteen 12-pounders, aided as she was by two consorts of somewhat similar character, dominated the Lake as soon as she was afloat, reversing all the conditions. To place and equip her, however, required time, invaluable time, during which the American’s two existing schooners exercised control of the lake.

Amid the many difficulties which lack of resources imposed upon all American undertakings, Benedict Arnold, commander of the force, succeeded in getting afloat with three schooners, a sloop, and five gondolas, on the 20th of August.  He cruised at the upper end of Champlain till the 1st of September, when he moved rapidly north, and on the 3rd anchored in the lower narrows, twenty-five miles above St. John's, stretching his line from shore to shore.  Scouts had kept him informed of the progress of the British naval preparations, so that he knew that there was no immediate danger; while an advanced position, maintained with a bold front, would certainly prevent reconnoissances by water, and possibly might impose somewhat upon the enemy.  The British, however, erected batteries on each side of the anchorage, compelling Arnold to fall back to the broader lake. He then had soundings taken about Valcour Island, and between it and the western shore; that being the position in which he intended to make a stand.

Arnold's last reinforcements reached him at Valcour on the 6th of October.  On that day, and in the action of the 11th, he had with him all the American vessels on the Lake, except one schooner and one galley.  His force, disposed to the best advantage, could bring into action at one time, two 18's, thirteen 12's, one 9, two 6's, twelve 4's, and two 2-pound canon, independent of swivels; or a total of thirty-two guns.  To this the British had to oppose, in three broadside vessels, nine 12's and thirteen 6's, and in twenty gunboats, twenty other brass guns, "from twenty-four to nines, some with howitzers;" total forty-two guns.

These minutiæ are necessary for the proper appreciation of what British Captain (later Admiral) Charles Douglas justly called "a momentous event."  It was a strife of pigmies for the prize of a continent, and the leaders are entitled to full credit both for their antecedent energy and for their dispositions in the contest; not least the unhappy man who, having done so much to save his country, afterward blasted his name by a treason unsurpassed in modern war.

Energy and audacity had so far preserved the Lake to the Americans; Arnold determined to have one more try of the chances.  He did not know the full force of the enemy, but he expected that "it would be very formidable, if not equal to ours."  The season, however, was so near its end that a severe check would equal a defeat, and would postpone British General Carleton's further advance to the next spring. Besides, what was the worth of such a force as the American, such a flotilla, under the guns of Ticonderoga, the Lake being lost?  It was eminently a case for taking chances, even if the detachment should be sacrificed, as it was.

Arnold's original purpose had been to fight under way; and it was from this point of view that he valued the galleys, because of their mobility.  It is uncertain when he first learned of the rig and battery of Inflexible; but a good look-out was kept, and the British squadron was sighted from Valcour when it quitted the narrows.  The British stood up the Lake with a strong north-east wind, keeping along Grand Island, upon which their attention doubtless was fastened by the intelligence which they had received; but it was a singular negligence thus to run to leeward with a fair wind, without thorough scouting on both hands.  The consequence was that the American flotilla was not discovered until Valcour Island, which is from one hundred and twenty to one hundred and eighty feet high throughout its two miles of length, was so far passed that the attack had to be made from the south—from leeward.

When the British were first made out, Arnold's second in command, David Waterbury, urged that in view of the enemy's superiority the flotilla should get under way at once, and fight them "on a retreat in the main lake;" the harbor being disadvantageous "to fight a number so much superior, and the enemy being able to surround us on every side, we lying between an island and the main."  Waterbury's advice evidently found its origin in that fruitful source of military "errors of design," which reckons the preservation of a force first of objects, making the results of its action secondary.

With sounder judgment, Arnold decided to hold on.  A retreat before square-rigged sailing vessels having a fair wind, by a diverse force like his own, of unequal speeds and batteries, could result only in disaster.  Concerted fire and successful escape were alike improbable; and besides, escape, if feasible, was but throwing up the game.  Better trust to a steady, well-ordered position, developing the utmost fire. If the enemy discovered him, and came in by the northern entrance, there was a five-foot knoll in mid-channel which might fetch the biggest of them up; if, as proved to be the case, the island should be passed, and the attack should be made from leeward, it probably would be partial and in disorder, as also happened. The correctness of Arnold's decision not to chance a retreat was shown in the retreat of two days later.

When the British discovered the enemy, they hauled up for them.  Arnold ordered one of his schooners, Royal Savage, and the four galleys, to get under way; the two other schooners and the eight gondolas remaining at their anchors. Royal Savage, dropping to leeward,—by bad management, Arnold says, came, apparently unsupported, under the distant fire of Inflexible, as she drew under the lee of Valcour at 11 A.M., followed by Carleton, and at greater distance by Maria and the gunboats.  Three shots from the ship's 12-pounders struck Royal Savage, which then ran ashore on the southern point of the island.

Inflexible, followed closely by Carleton, continued on, but fired only occasionally.  Between the island and the main the north-east wind doubtless drew more northerly, adverse to the ship's approach; but, a flaw off the cliffs taking the fore and aft sails of Carleton, she fetched "nearly into the middle of the rebel half-moon."  Maria, on board which was British General Carleton, together with Commander Thomas Pringle, commanding the flotilla, was to leeward when the chase began, and could not get into close action that day.  By this time, seventeen of the twenty gunboats had come up, and, after silencing Royal Savage, pulled up to within point-blank range of the American flotilla.  "The cannonade was tremendous."

British Lieutenant Edward Longcroft, of the radeau Thunderer, not being able to get his raft into action, went with a boat's crew on board Royal Savage, and for a time turned her guns upon her former friends; but the fire of the Americans forced him again to abandon her, and it seemed so likely that she might be re-taken that she was set on fire, when "two rebel boats were very near her. She soon after blew up."

The American guns converging on Carleton in her central position, she suffered severely.  Her commander, Lieutenant Dacres, was knocked senseless; another officer lost an arm; only Edward Pellew, afterward Lord Exmouth, remained fit for duty.  The spring being shot away, she swung bows on to the enemy, and her fire was thus silenced.  Captain Pringle signaled to her to withdraw; but she was unable to obey.  To pay her head off the right way, Pellew himself had to get out on the bowsprit under a heavy fire of musketry, to bear the jib over to windward; but to make sail seems to have been impossible.  Two artillery boats were sent to her assistance, "which towed her off through a very thick fire, until out of farther reach, much to the honor of Mr. John Curling and Mr. Patrick Carnegy, master's mate and midshipman of the Isis, who conducted them; and of Mr. Edward Pellew, mate of the Blonde, who threw the tow-rope from Carleton's bowsprit."  This service on board Carleton started Pellew on his road to fortune in the British Navy.

In this small but stirring business, the Americans, in addition to Royal Savage, had lost one gondola. Besides the injuries to Carleton, a British artillery boat, commanded by a German lieutenant, was sunk.  Towards evening Inflexible got within point-blank shot of the Americans, "when five broadsides," wrote Douglas, "silenced their [the Americans’] whole line."  One fresh ship, strongly built, and a concentrated battery, has an unquestioned advantage over a dozen light-built craft, carrying one or two guns each, and already several hours engaged.

At nightfall Inflexible dropped out of range, and the British squadron anchored in line of battle across the southern end of the passage between the island and the main; some vessels were extended also to the eastward, into the open Lake.  "The best part of my intelligence," wrote Burgoyne next day from St. John's, to Douglas at Quebec, "is that our whole fleet was formed in line above the enemy, and consequently they must have surrendered this morning, or given us battle on our own terms.  The Indians and light troops are abreast with the fleet; they cannot, therefore, escape by land."