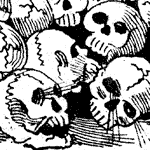 "But of all atrocities, those committed in the prisons and prison ships of New York are the most execrable, and indeed there is nothing in history to excel the barbarities there inflicted. Twelve thousand suffered death by their inhuman, cruel, savage, and barbarous usage on board the filthy and malignant prison ships. Cunningham, the like of whom, for unpitying, relentless cruelty, the world has not produced, thirsted for blood, and took an eager delight in murder."

William Cunningham was the most hated man in America during the Revolution.  Today, he would be branded a war criminal, and tried for crimes against humanity.  His inhuman treatment of American POWs during the Revolution should be well known, but, his dark deeds have been forgotten.  The sufferings of the patriots who gave us freedom must be remembered today, and Americans should count the cost of obtaining liberty, before surrendering it.

WE WILL CONDENSE all that we have to say of this William Cunningham, Provost Marshal, whose cruelty and wickedness are almost inconceivable, into one chapter, and have done with the dreadful subject. William Cunningham was an Irishman, born in Dublin Barracks in 1738. His father was a trumpeter in the Blue Dragoons. When he was sixteen he became an assistant to the riding-master of the troop. In 1761 he was made a sergeant of dragoons, but peace having been proclaimed the following year, the company to which he belonged was disbanded. He afterwards commenced the business of a “scaw-banker,” which means that he went about the country enticing rustics to ship to America, on promise of having their fortunes made in that country; and then by artful practices, produced their indentures as servants, in consequence of which on their arrival in America they were sold, or at least obliged to serve a term of years to pay for their passage.

When Cunningham first appeared in New York he offered himself as a horse-breaker, and insinuated himself into the favor of the British officers by blatant Toryism. He soon became obnoxious to the Whigs of that city, was mobbed, and fled to the Asia man-of-war for protection. From thence he went to Boston, where General Gage appointed him Provost Marshal. When the British took possession of New York he followed them to that city, burning with desire to be revenged upon the Whigs.

He is said to have caused the death of thousands of American prisoners by selling their provisions, exchanging good for spoiled food, and even by poisoning them. Many also fell victims to his murderous violence. About two hundred and fifty of these poor creatures were taken out of their places of confinement at midnight and hung, without trial, simply to gratify his bloodthirsty instincts. Private execution was conducted in the following manner. A guard was first dispatched from the Provost, about midnight, to the upper barracks, to order the people on the line of march to shut their window shutters and put out their lights, forbidding them at the same time to presume to look out of their windows on pain of death. After this the prisoners were gagged, and conducted to the gallows just behind the upper barracks and hung without ceremony there.

Watson, in his "Annals of New York," says that Cunningham glutted his vengeance by hanging five or six of his prisoners every night, until the women who lived in the neighborhood petitioned Howe to have the practice discontinued.

A pamphlet called "The Old Martyrs' Prison," says of Cunningham : "His hatred of the Americans found vent in torture by searing irons and secret scourges to those who fell under the ban of his displeasure. The prisoners were crowded together so closely that many fell ill from partial asphyxiation, and starved to death for want of the food which he sold to enrich himself."

"They were given muddy and impure water to drink, and that not in sufficient quantities to sustain life. Their allowance was, nominally, two pounds of hard tack and two of pork per week, and this was often uncooked, while either the pork, or the biscuit, or both, were usually spoiled and most unwholesome.

"Cunningham destroyed Nathan Hale's last letters containing messages to his loved ones, in order, as he said, that "the rebels should not know that they had a man in their army who could die with such firmness."

From Elias Boudinot's "Journal of Events" during the Revolution : "Accordingly I went to the Provost with an British officer, where we found near thirty Officers from Colonels downwards, in close confinement in the jail in New York. After some conversation with the late Ethan Allen, I told him my errand, on which he was very free in his abuse of the British. The prisoners informed us that some had been confined in the Dungeon for a night to await the leisure of the General to examine them and forgot for months ; that they had received the most cruel treatment from the Provost Martial, being locked up in the dungeon on the most trifling pretenses, such as asking for more water to drink on a hot day than usual, or for sitting up a little longer in the evening than orders allowed, or for writing a letter to the General making their complaints of ill-usage.

"On hearing a number of these instances of Cruelty, I asked who was the Author of them, and they answered the provost keeper, so I desired the Officer to call him up that we might have him face to face. He accordingly came in, and on being informed of what had passed, he was asked if the complaints were true. He, with great insolence answered that every word was true — on which the British Officer, abusing him very much, asked him how he dared to treat Gentlemen in that cruel Manner, He, insolently putting his hands to his side, swore that he was as absolute there as General Howe was at the head of his Army.

"I forgot to mention that one Officer, Lieutenant was taken Prisoner and brought in with a ball through the leg. He was sent to the Provost to examined, next night he was put into the Dungeon remained there ten weeks, totally forgotten by the Marshal, and never had his wound dressed except as he did it with a little Rum and Water given to him by Sentinels.

"Prisoners in the French church, amounting on an average to three or four hundred, could not all lay down at once, that from the 15th October to the first January they never received a single stick of wood, and that for the most part they eat their Pork Raw, when the Pews and Door, and Wood on Facings failed them for fuel.

"The Provost Martial used to sell their provisions and leave them to starve, as he did their Allowance of Wood. I received information from a British Officer who confided in my integrity, that he happened in the Provost jail at the time the Provost Martial was locking up the Prisoners. He had ordered them from the Yard into the House. Some of them being ill with the Dysentery could scarcely walk, and for not coming faster he would beat them with his Rattan. One being delayed longer than the rest, on his coming up Cunningham gave him a blow with one of the large Keys of the jail which killed him on the Spot."

Dr. Albigense Waldo was a surgeon in the American army at Valley Forge, and he declares in his Journal concerning the prisoners in Philadelphia that "the British . . starved them slowly . . . One of these unhappy men, driven to the last extreme of hunger, is said to have gnawed his own fingers to the first joint from the hand, before he expired. Others ate the mortar and stone which they chipped from the prison walls, while some were found with bits of wood and clay in their mouths, which in their death agonies they had sucked to find nourishment."

Wherever General Howe and Cunningham were together, either in New York or in Philadelphia, the most atrocious cruelties were inflicted upon the American prisoners in their power, and yet some have endeavored to excuse General Howe, on what grounds it is difficult to determine. It has been said that Cunningham acted on higher authority than any in America, and that Howe in vain endeavored to mitigate the sufferings of the prisoners. This, however, is not easy of belief. Howe must at least have willfully blinded himself to the wicked and murderous violence of his subordinate. It was his duty to know how the prisoners at his mercy fared, and not to employ murderers to destroy them by the thousands as they were destroyed in the prisons of New York and Philadelphia.

Oliver Bunce, in His "Romance of the Revolution," thus speaks of the inhumanity of Cunningham: "But of all atrocities those committed in the prisons and prison ships of New York are the most execrable, and indeed there is nothing in history to excel the barbarities there inflicted. Twelve thousand suffered death by their inhuman, cruel, savage, and barbarous usage on board the filthy and malignant prison ships. Cunningham, the like of whom, for unpitying, relentless cruelty, the world has not produced, thirsted for blood, and took an eager delight in murder."